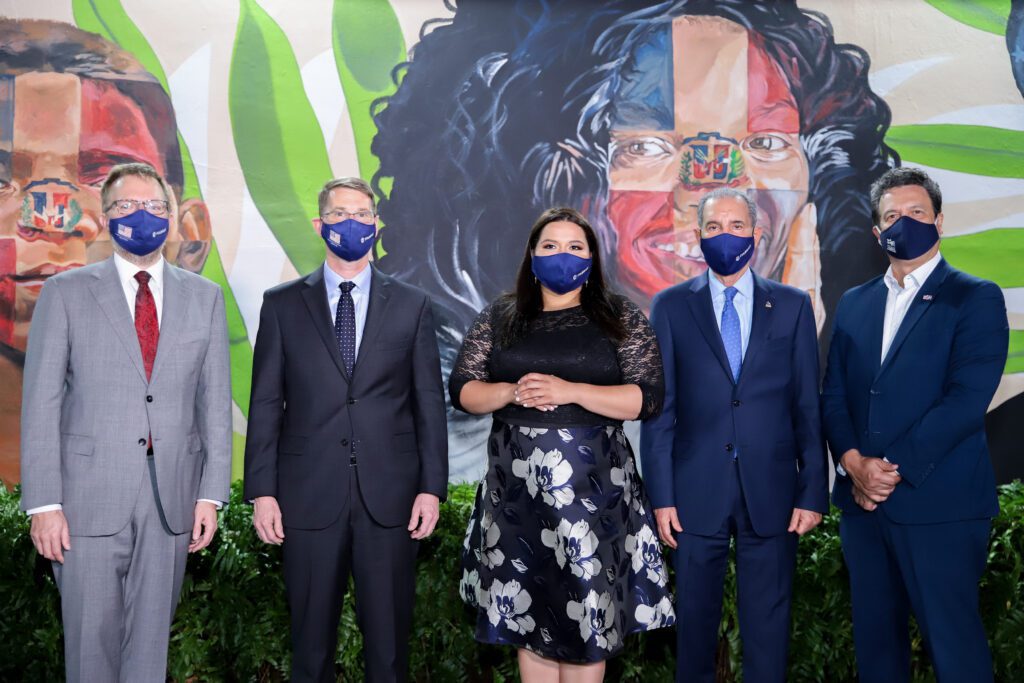 Since the program’s inception in 1946, more than 500 Dominicans have been Fulbright scholars and completed graduate programs in the United States.

Santo Domingo, D.N. – The Chargé d’Affaires of the U.S. Embassy, Robert Thomas, the Deputy Assistant Secretary for Western Hemisphere Affairs of the Department of State, Mark Wells, and the Executive Director of the Instituto Cultural Domínico Americano, Ramón Sosa, officiated at a reception to celebrate the 75th global anniversary of the Fulbright scholarship program, which has allowed more than 500 Dominican students to pursue master’s and doctoral degrees at various universities in the United States.

The reception was held as part of the Fulbright Program Anniversary Conference: 75 Years of Impact, which included the participation of Fulbright alumni from the Dominican Republic and highlighted its impact on key issues for the advancement of democracy, including education, public health, security, economic prosperity and governance.

Deputy Assistant Secretary Wells stated that “The Fulbright program has enabled wonderful things to happen over the past 75 years. The impact of the more than 500 Dominican Fulbright graduates is incredible proof of the program’s power to promote and strengthen democracy. With excellent partners like the ones we have here in the Dominican Republic, I believe the next 75 years will be even more promising. Together we will build a bright future.

While the executive director of the Instituto Cultural Domínico Americano, Ramón Sosa, expressed that “It is because of this coherence in the declaration of principles, objectives and values that today we, at the ICDA, feel rejoiced to receive the celebration of the first 75 years of the Fulbright program, as if we were simply opening the doors to receive our own family”.

Ashley Morales-Cartagena, director of the School of Civil and Environmental Engineering at PUCMM in Santo Domingo, Fulbright-MESCYT 2013 graduate of the University of Illinois at Urbana-Champaign, offered a few words about her experience, in which she stated that “being a Fulbright grantee is being willing to reduce distances and find common ground, despite having different customs and languages, being Fulbright is understanding that we are not really so different, but that we are united by the same challenges and the same goals.”

Fulbright alumni in the country are actively participating in the Dominican Republic’s labor market. Forty-four percent of them are currently working in private sector organizations. Twenty-seven percent support the advancement of higher education and serve in academic institutions as professors, researchers, and administrators. Twenty-three percent of Fulbright alumni are public servants and work in government institutions in the country.

The reception was attended by the Minister of Higher Education, Science and Technology, Franklin García Fermín, as well as Fulbright alumni and representatives of civil society, among others.  A recording of the Conference is available on the U.S. Embassy’s YouTube page.

About the Fulbright Program

In 1946, after World War II, President Harry S. Truman signed into law the Fulbright Program, an international academic exchange program with an ambitious goal: to increase mutual understanding and support friendly and peaceful relations between the people of the United States and other countries. Since then, the Fulbright Program has provided nearly 400,000 students, scholars, teachers, artists and professionals from all backgrounds and fields with the opportunity to study, teach and conduct research, exchange ideas and contribute to finding solutions to complex global challenges. Since its launch, more than 500 Dominicans have participated in the Fulbright program and completed graduate programs in the United States, including 125 who have done so through Fulbright-MESCyT, with the support of the Ministerio de Educación, Ciencia y Tecnología of the Dominican Republic.

Through this prestigious program, Fulbright scholars are able to research, teach, and make lasting connections. These experiences help them advance their careers and professional networks, make meaningful contributions abroad and in their communities, and enrich their personal and professional lives. Fulbright alumni return from their programs to make significant, lasting, and positive changes in their home countries and communities by sharing stories of their own Fulbright experiences and often continuing research and other collaborations initiated during their programs. Many alumni have gone on to positions of leadership and distinction, and form a network of hundreds of thousands around the world, embodying the power and reach of international academic exchange in bringing people together and nations closer to a more peaceful and prosperous world.